3 Ways to Clean Grout Between Tiles

Even people who keep a clean home know that mopping floors and wiping walls isn’t enough to keep your tile grout clean. Once in a while, you’ll need to clean the grout between your tiles to get rid of dirt and soap buildup. You can get this done by booking a cleaning service and adding the ‘deep clean’ extra. Alternatively, you can do it yourself with some household products and  a little elbow grease.

In this post, we’ll share 3 methods that explain how to clean grout between tiles so that they look brand new again. 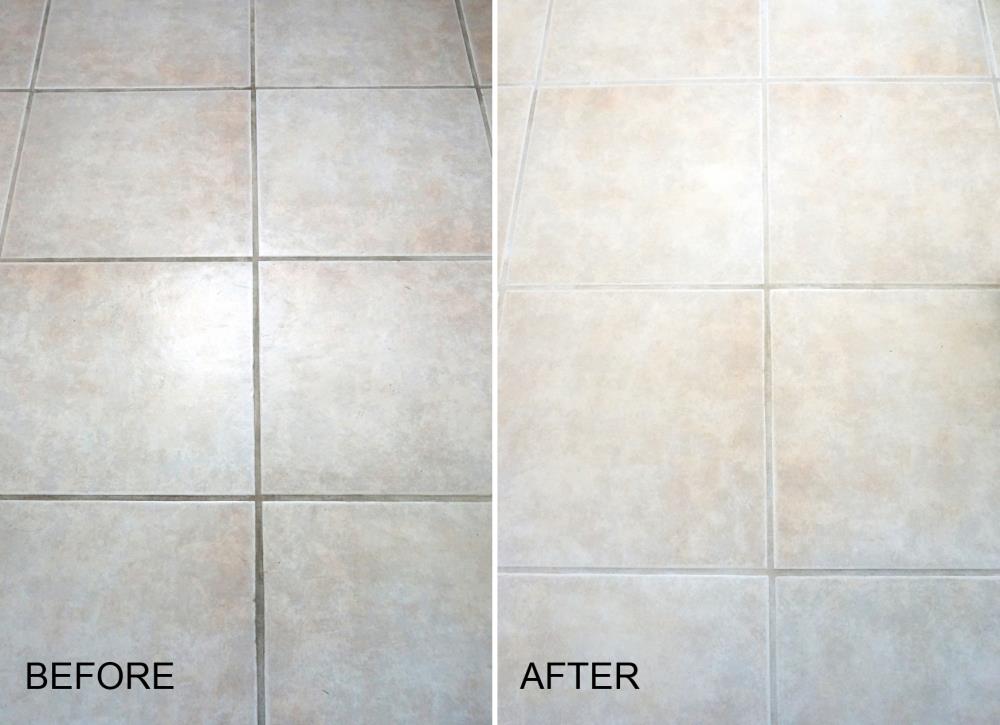 How to Clean Grout with Baking Soda & Vinegar

Pro Tip: If you’ve got a big area to work on then you can even mop the walls too. However, this is only recommended if the floor is also tiled, like it would be in your bathroom. Also, make sure you do the walls first so you can mop up any run off when you do the floor.

Mix 1 part water (e.g. 1/4 cup) with 3 parts baking soda (e.g. 3/4 cup) to form a paste. While this paste is a versatile cleaning solution that will work with all colours of grout, vinegar can be harmful to some natural stone like marble and limestone.

Apply the paste to the lines of grout using your finger. While baking soda isn’t harmful, we suggest using rubber gloves to prevent scratching or irritating your skin when you rub the paste into the grout.

Mix 1 part vinegar with 1 part water (50:50 solution) in a spray bottle. Then spray the paste on the grout with this solution. Immediately, you should see the paste start bubbling, which indicates that the cleaning process has begun.

Remember: Don’t use vinegar on marble or limestone. You might need to get a gurney or pressure washer out for them.

Step 4: Give it Time to Work its Magic

Step 5: Scrub the Grout with a Brush

Using a nylon bristled brush (like a dishwashing brush or an old toothbrush), scrub the moist paste into the grout.

Tip 1: Scrub along the lines of the grout so the bristles spend most of their time working on the grout rather than the tiles

Tip 2: Pay extra attention the intersecting corners and edges of the grout lines to make sure these areas get cleaned well. 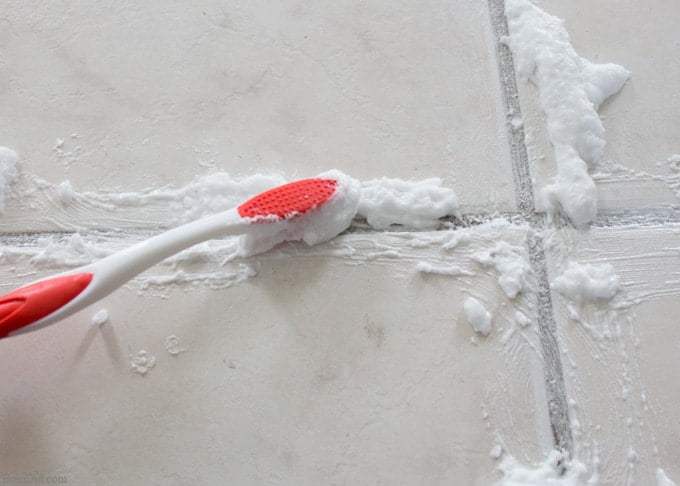 Step 6: Clean Up the Mess

Using plain water, mop the floor to remove the paste. If you’re cleaning grout on walls, then do this area first and then clean up anything that drips onto the floor. Make sure you rinse the mop and change the water frequently while you’re doing this so that you don’t end up just spreading the mess around.

Mix 3 parts baking soda with 1 part hydrogen peroxide. Then add a tablespoon of dishwashing liquid to form a paste. The 3 ingredients in this powerful paste clean grout in specific ways:

1. The baking soda acts as a mild abrasive;

2. The hydrogen peroxide creates a chemical reaction when combined with the baking soda, which releases bleaching oxygen ions;

3. The dishwashing liquid helps to dissolve grease and dirt so it can be removed more easily.

NOTE: This method may also cause damage to tiles due to the bleaching oxygen ions that are released. If possible, first test it out on a small patch that’s generally hidden from view.

Step 3: Apply the Paste with a Brush

Using a nylon bristled brush or gloved fingers, apply the paste to the grout. Ensure that all areas that you want to clean are properly coated with the paste so that you get an even result.

Step 4: Daydream About How Beautiful Your Home Will Look

The paste needs at least 15 minutes to work its magic. Like the pervious method, you may see some bubbling happen as it does its thing. Give it a bit of time to ensure that the paste fully remove the stains in the grout.

Using warm water, mop up the the paste. Make sure you follow our recommendations in Step 6 of the previous method. If you’re doing a large area, you may want to start by using a moist cloth to clean up the bulk of the paste and then mop the area. Ensure that no residue if left behind, otherwise the soap could be slippery and the bleaching may effect the tiles if left for a long period of time.

How to Clean Grout with Bleach

If all else fails then you could always try good old fashioned bleach. While it’s super effective at cleaning grout, there’s a good chance that it may damage certain tiles. We usually advise only using this method on white tiles, like the ones you may find in your bathroom (and particularly when the grout it white too).

If you’re going to clean grout with bleach, it’s a good idea to test it out on a small patch that is generally out of sight so you can check for colourfastness. It’s also a good idea to use gloves and wear old clothes as you may end up getting some bleach on them if you’re not careful.

Pour or spray the bleach onto the grout lines, making sure that you apply enough to fully cover all of the grout. Just do one section at a time to avoid getting bleach on your clothes and ruining them. Allow the bleach a few minutes to soak in and then get to work.

Step 3: Brush the Bleach into the Grout

Using a nylon bristled brush, work the bleach into the grout. Scrub back and forth along the grout lines. Make sure you get the corners where dirt is most likely to accumulate. 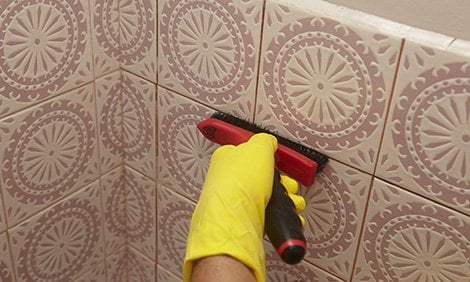 For tough to clean spots, apply more bleach or dip the scrubbing brush into a glass of bleach and scrub again. More bleach = more cleaning power.

Using warm water, wipe or mop up the the bleach. Make sure that you do this thoroughly as any bleach left over will get into your socks and could get transferred into your carpets, which would be a disaster! 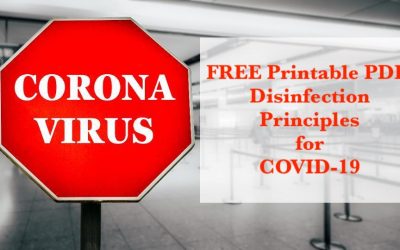 A proper cleaning process is important around the house. This article contains a number of tips to stop Coronavirus spreading in your home. 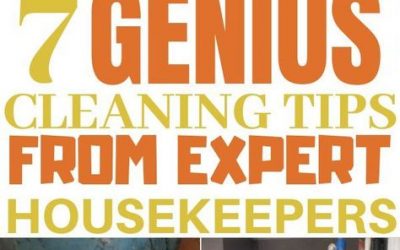 7 Expert Cleaning Tips Everyone Should Consider

As Expert cleaners, we often get asked for expert cleaning tips from our clients – tips that they can follow when we aren’t there.

Because we get asked so often, we decided to outline some of them in this article. 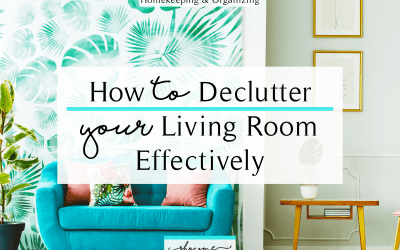 For many people a common “mess” problem is clutter. Hence, we’re writing this article that contains a number of cleaning tips to help you with decluttering your living room.

A common refrain from mums is that they are incredibly busy and their house is a mess. Busy mums tell us that they don’t have time to clean. We get it. It can be hard and it can be easy to become overwhelmed. That’s why we have written this article. This article contains 7 cleaning tips for busy mums. 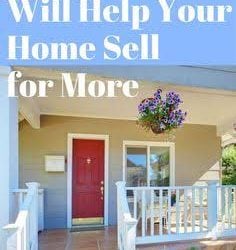 12 Cleaning Tips Before Selling Your Home 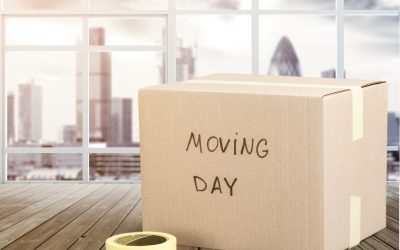 8 Cleaning Tips When Moving Out of Your Rental Property 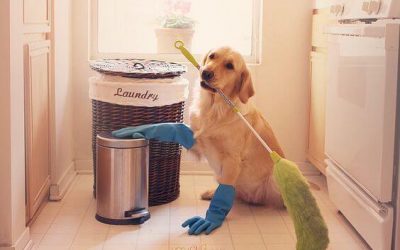 The purpose of this article is for us to share with you 6 cleaning tips for pet owners. These tips come from our expert cleaners, themselves pet owners. Follow these tips and you can be happier with your beloved pet as part of your family. 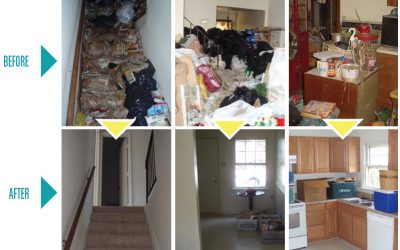 If your house is not a sanctuary and is actually a place that leaves you stressed then this article may be for you. This article contains 7 cleaning tips for hoarders, to help you get on top of your current situation and ensure that it doesn’t happen again. 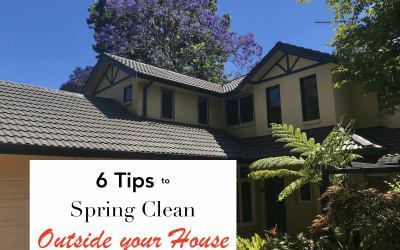 Spring Cleaning Tips – Outside the House

6 Spring cleaning tips for outside the house. As we come into warmer weather you’ll be entertaining outside more often and you’ll want to be proud to show your guests the areas outside your house

How to Clean Your House Fast and Properly

Learn how to clean your house fast and properly. Doing things right means you’ll only have to do them once during your weekly clean. Save time like a pro.